I have been spending time near Linn and Market Streets in Iowa City for most of my adult life. I lived on Market Street after getting my master’s degree—my last long stint of bachelorhood before marrying in 1982.

Within a small radius, so much happened that anytime I return, the trip is imbued with memories. But for the traffic, I would stand in the intersection for hours. I mostly settle for a window seat at the nearby coffee shop for my daydreaming. 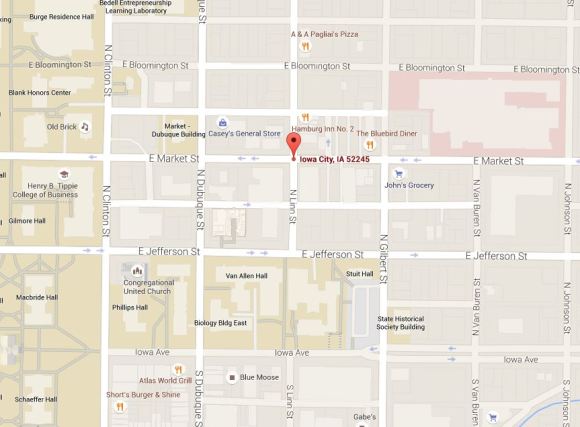 Our daughter was born here, and performed the role of a dog on Gilbert Street. It was also one of the few times I remember her performing the guitar in public. We had breakfast at the Hamburg Inn No. 2 after pulling all-night security at Riverside’s Festival Theatre in City Park. Hamburg Inn No. 1 was gone by then.

“Shady streets, very old white frame houses, porch swings, lilacs, one-pump gas stations, and good neighbors…” wrote W.P. Kinsella in Shoeless Joe. “We have a drugstore with a soda fountain… It’s dark and cool and you can smell malt in the air like—a musky perfume. And they have cold lemon-Cokes in sweating glasses, a lime drink called a Green River, and just the best chocolate malts in America. It’s called Pearson’s—right out of a Norman Rockwell painting.”

Pearson’s is now the bank in the photo.

We still favor Pagliai’s Pizza and I bring home a pie from time to time when I’m near around supper time. It is one of the places that hasn’t changed much through the years.

Down the street on Jefferson the university had a portable building where students could drop off punch cards to run on the computer in the early days of programming. Who knew what computing would become?

I was briefly enrolled in James A. Van Allen’s astronomy class—a chance to learn from the legendary physicist directly. I had to drop after registering for more classes than I could handle that semester. More than any teacher I remember, he stretched the limits of my ability to learn.

After so many years of wanting to hear him, when Saul Bellow read from Something to Remember Me By at Macbride Hall, I did.

I met James Hansen, Bill Fehrman, Beau Biden, Elizabeth Edwards, and heard countless speakers—too many to list. With each visit I recall one or another who made an impression. How could I forget Toni Morrison, introduced by Paul Engle, and the bat flying around her head at Old Brick?

I bought books at Murphy Brookfield, Prairie Lights, Iowa Book and Supply, the Salvation Army, the Haunted Bookshop and at the State Historical Society. I still have most of them.

Rich with 45 years of memories, I look forward to each return to Linn and Market—for a cup of coffee, a meeting with my nearby editor, and often, just to sit and remember before a meet up with a friend or two. For me, it will always be home.