Weeding kale produced a peck of leaves for the kitchen. The garden plants are healthy enough I sent 12 kale seedlings reserved as replacements into town for re-distribution. They found a suitable home as I spent a couple of hours in the kitchen preparing dinner.

Yesterday was the first day in a while where life produced time to work in the garden when weather was sunny and without rain. The ground was soaked, making weeding easier. I hardly made a dent in the work, however, a garden waits for no one and there was plenty to harvest. In addition to kale, there were carrots, sweet peas and turnips. 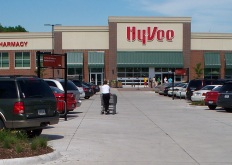 My editor assigned a new story in the morning, so I went to Iowa City to interview the subject. On the way home, I stopped at the grand opening of the new Hy-Vee on North Dodge Street.

It was different from the store where we had shopped for more than 20 years. Expecting the latest in supermarket merchandising I was prepared—for the most part.

My shopping list included one item: a six-pack of beer for a beverage with dinner. Using the latest tactics to resist over spending, I grabbed a hand-held basket instead of a cart. I picked up one extra item, some Iowa-grown Jolly Time popcorn, which is a pantry staple and was on sale.

The produce section and bakery were just inside the front door. I stopped and took it in. The space was crammed full of people and products. About eight people were serving food samples on toothpicks. Management staff was present in abundance. It took me a while to find the regular produce section, which had a misting tube above, giving the broccoli, peppers and other items a shiny appearance, but condemning them to a shorter shelf life. I thought about the scruffy look of the produce I had just picked, and longed for another carrot just pulled from the ground.

It took me a while to find the dairy aisle, which was, of course, furthest from the front door. In all, I spent less than 15 minutes inside, and look forward to returning to evaluate the tens of thousands of items inside when there aren’t so many people.

At home, I put the six-pack of LaBatt Blue in the ice box and brought the garden produce upstairs. I opened a beer.

The concept was a dinner made from locally produced kale, peas, carrots and eggs. I put rice on to cook and got to work cleaning the harvest. By the time I finished, almost three hours had elapsed.

Dinner was the process of preparation—including the trip to Iowa City—and a vision of the final plating.

There were four distinct dishes: peas and carrots; kale sauteed with onions and spring garlic; brown rice cooked in vegetable broth; and eggs over easy. I plated the kale, rice and peas and carrots as above, then topped it with two eggs, sprinkled with feta cheese and a tablespoon of home made bell pepper sauce.

I covered one plate without the eggs and left it on the counter for Jacque’s dinner after work. Mine was too much to eat, so there were leftovers to be made into a breakfast burrito later in the week.

This was slow cooking. More than that, it was a life. A day of retreat from low wage work, doing things that matter. We need a slow food day in the context of busy lives—more than we understand.